After digging a bit more into bolts and nuts a learned that torque isn’t tension.

After reading Tricks Engineers Need to Know About Fasteners and seeing these YouTube videos Torque and Tension and Applied Bolting – Torque isn’t Tension I was surprised that that torquing a bolt is not as accurate as I thought.

On an Ebay auction I purchased a Skidmore-Wilhelm meter for not too much money and could do some tests myself.

My setup: AN3-17A bolt + washer + Skidmore-Wilhelm + 6 washers + AN365 nut (I used a longer bolt and that many washers to simulate the multiple layers that the wingspar has at the root).
I used my Garmin action camera to record the tests:

Next I measured how much torque and clamping force was needed to break the bolt (or strip the thread off): 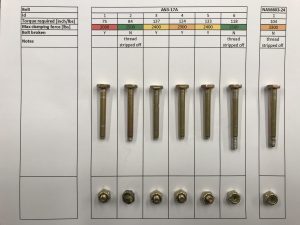 The difference in torque before the bolt or nut fails is quite huge: between 75 and 137 inch/lbs. The clamping force is between 2000 and 2500 lbs before the joint fails which is less than the 2640 lbs (see previous post) due to the rotational force.

One thought on “Torque vs tension”